Let’s start with the basic question:  what’s a stamp?  At its simplest, a postage stamp is issued by a postal authority to allow for the payment of a postal service.  Postage stamps are almost always paper, and usually have some kind of adhesive on the back.  They (almost always) include text or symbols identifying the authority that issued the stamp and the value or denomination of the stamp.  They are (most often) applied to envelopes to show that postal fees have been paid.

For example, the stamp shown here is a 1981 stamp from France.  It includes the country name at lower right, and a 1,80 franc denomination at upper left. 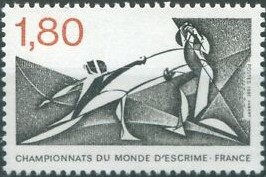 Stamps come in all colors, shapes and sizes in a bewildering variety of designs, types, and formats, but they share these basic attributes in common.

Stamps can be collected both “mint” and “used.”

A “mint” stamp is one that has not been used for a postal purpose, or one that is in the same condition it was in when it was sold at the post office.  A “mint” United States stamp these days is a self-adhesive stamp that is still on its original backing paper.  Older stamps typically have water-activated gum.  We had to lick them before sticking on an envelope.

A “used” stamp, by contrast, has been through the mail or otherwise has performed its job of paying for a postal service, most often to have a letter delivered.   Stamps, when used, are typically cancelled to prevent re-use (usually with ink, sometimes by other methods).  Cancellations themselves can be quite collectible and interesting in their own right, but more on that later.  The United States stamps shown here have been used and show cancellation marks. 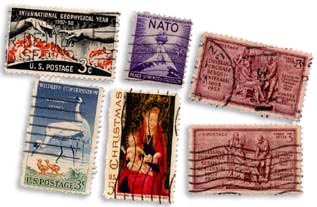 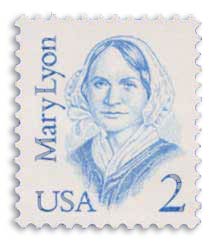 Commemorative stamps are issued to honor a specific person, thing, subject, or event.  They tend to be larger in size and more prominent in appearance. In the United States, they are printed in smaller quantities and on sale for shorter periods of time than definitive issues. 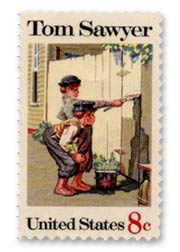 Special stamps are hybrids of definitive and commemorative stamps, combining the regular use of a definitive issue with the color and appeal of a commemorative.  Typical examples include holiday stamps, some international rate stamps, and certain high value stamps for priority and express mail.

Sheets:  Most stamps, whether definitive or commemorative, are sold in rectangular flat “sheets” or “panes.”  Most current US stamps come in panes of 10 to 20 stamps. 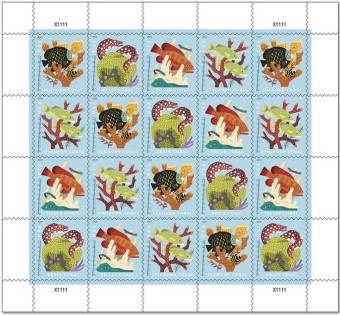 Coils:  Some stamps are available in rolls, also known as coils.  These stamps are only attached to each other at the ends and are intended for high-volume stamp users.  The postal service manufacturers coils of up to 10,000 stamps for some purposes.  Coils are frequently collected in pairs or in longer strips. 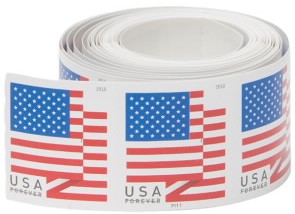 Booklets:  Stamps are sometimes sold in bound, folded, or stapled booklets for customer convenience, which allow the stamps to be more easily transported and protected. 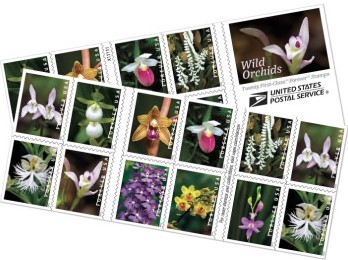 Most stamps are intended for use on “first class” mail – letters, postcards, and the like.  But stamps have also been issued to pay for a number of special services and for other purposes.  Move on to Lesson 2 for more!