Most stamps were intended to be used on mail.  Collectors call an envelope that was used to carry mail a “cover.”  Of course, mail can take forms other than envelopes – postcards, packages, and the like.

Covers and other mail items form the basis of “postal history” – traditionally viewed as the study of postal routes, rates, markings and systems.  Beyond the stamps on a cover, a postal historian will study the postal rates paid by the stamps, the cancels and other postal markings on the stamps and cover, the post offices that handled a mail item, and the routes that a mail item followed from its origin to destination.

Mail existed before the use of stamps.  So-called “stampless covers” show postal markings and rates, but there are no postage stamps attached.  These covers, especially before 1850, are usually folded sheets of paper, literally “folded letters.”  Because the writers just folded their letters and wrote the address on the outside, many of these letters still include their letter content inside. 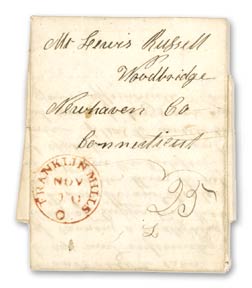 Cancels and postal markings are popular areas for both stamp collectors and postal historians.  A stamp collector might be interested in different colors or shapes of cancels on a particular stamp issue.  Postal historians might seek all the different postmarks used in a particular town or city, or look for other postal markings that show how a cover was handled in the mail stream or what may have happened to it en route.  The earliest postal markings were manuscript – pen and ink.  Postmasters also used a wide variety of handstamp devices (wood, cork, metal or rubber).  Later in the 19th century, machines were developed to cancel larger quantities of mail.

Special types of mail – such as airmail, mail carried by steamboat or by railroad – are also popular areas for postal history collecting.

“First Day Covers” are another popular area to collect.  These covers demonstrate the use of a stamp on its first day of issue.  Most United States stamps have had dedicated first days of issue (on a specific date, in a specific city) since the early 1920s, though now many stamps are available nationwide on the first day.  Since the late 1930s, most issues have had dedicated “first day of issue” cancels available.  Some collectors enjoy making their own first day covers, including creating their own art printed or drawn on the envelope to accompany the stamp and postmark.  Collectors call that added art a “cachet.”