Philately likely has the broadest array of literature and the deepest scholarship of any hobby – whole libraries exist that contain nothing but books and journals about stamps, postal history and postal services.  A wide variety of publications exists to assist any collector:

General books:  A huge number of guides to stamp collecting and general reference literature have been published over the years.  Several are likely available at your local library.  Many cover topics similar to this online guide.  Others contain more details about printing methods, collecting techniques and more.  One book that is enthusiastically suggested for any collector of United States stamps is the Encyclopedia of United States Stamps and Stamp Collecting, the second edition of which was published in 2016 by the United States Stamp Society, edited by Rodney Juell, Lynn R. Batdorf and Steven J. Rod.

Catalogs:  Stamp catalogs identify stamp varieties (typically using a proprietary numbering system) and place values on them.  The standard catalog brand in the United States is Scott, published by Amos Media.  Its worldwide catalog now extends to 12 volumes and costs hundreds of dollars (recent catalogs are, however, frequently available at your local library).  Scott also publishes a specialized one-volume catalog of just United States material, and a single-volume worldwide catalog covering the first century of stamps, from 1840 through 1940.  Electronic versions of the Scott catalogs are also available.  Other major catalog producers exist in other countries (and are particularly specialized in their own home country’s stamps), such as Unitrade (Canada), Stanley Gibbons (Great Britain), Michel (Germany), Yvert et Tellier (France), Bale (Israel), Zumstein (Switzerland), Facit (Scandinavia) and several others. 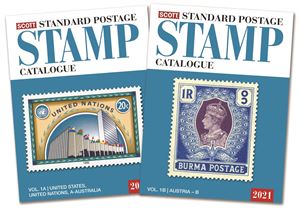 Newspapers and Magazines:  Several general interest stamp publications are available in the United States (and others are available elsewhere) that contain a wide variety of articles and news items devoted to the world of philately.  Linn’s Stamp News is a weekly hobby newspaper; American Philatelist is the monthly magazine of the American Philatelic Society.  American Stamp Dealer & Collector is published by the American Stamp Dealer’s Association.  There are several others.

Journals:  Specialty magazines, journals and newsletters are published by a myriad of societies devoted to specific areas of focus in philately.  For example, The Chronicle is published by the United States Philatelic Classics Society, which is devoted to the study of 19th century U.S. stamps, while First Days is published by the American First Day Cover Society and focuses on first day covers.  Many society journals have tremendous amounts of research that cannot be found in any other source and have significant value to advanced or specialized collectors.  See “Helpful Links” elsewhere on our site to find several of these societies and their journals.

Specialty reference works:  All sorts of books have been published about very specific areas of stamp collecting.  Books can be found about specific stamps or issues of stamps, about postal rates of a country, about post offices of a particular state, and thousands of other subjects.  The American Philatelic Research Library (affiliated with the American Philatelic Society) maintains a searchable online catalog.